• Melissa was interviewed with other aurora chasers for a feature story on Aurora Summit 18: Celebrating the Art, Culture, Science, and Photography of the Aurora Borealis. 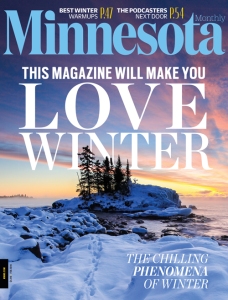 story for Minnesota Monthly in the February 2016 edition of the magazine. Coming up with a unique idea, Melissa pitched an essay to the editor on rare weather phenomena observed in northern winters, ranging from hoarfrost and frost flowers, to steam devils and light pillars. She also recommended the work of over a dozen photographers from Minnesota and Wisconsin, and 14 of those photographers were featured in the finished piece. Among the photos chosen for publication was her own image of sun dogs, after she captured the optical phenomenon on a point-and-shoot camera.

KARE 11
“Exploring Minnesota’s winter wonders”
TV News Spot, February 2016
• Melissa’s cover story for Minnesota Monthly and her photo of sun dogs were featured on KARE 11. The photo essay she pitched on rare and remarkable winter phenomena was inspired by incredible photos taken by many talented photographers in Minnesota and Wisconsin, ranging from hoarfrost and frost flowers, to steam devils and light pillars. 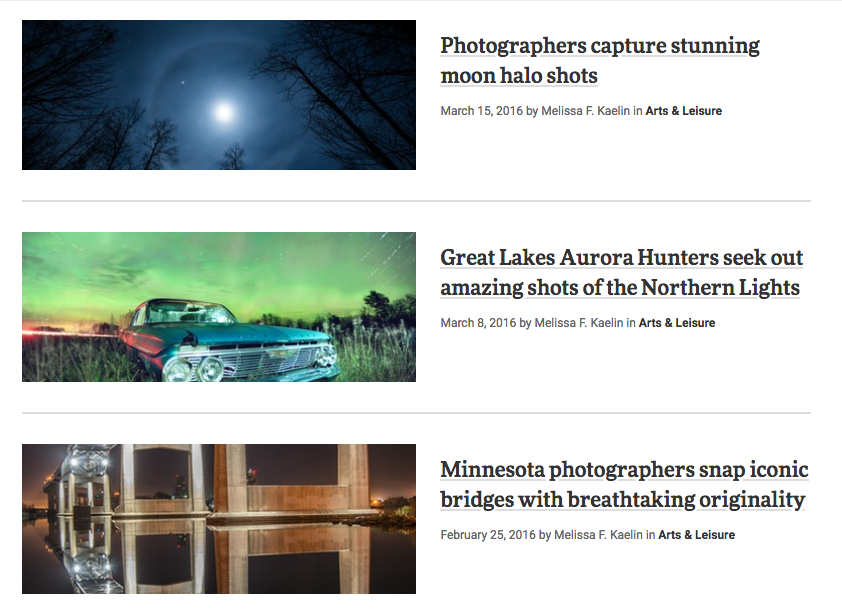 Lake County News Chronicle
“Aurora Summit Heading to Two Harbors”
Press Interview, October 2017
• Melissa was interviewed alongside other organizers before the launch of Aurora Summit 17: Celebrating the Art, Folklore, Science, and Photography of the Aurora Borealis. She co-founded the event alongside Dixie J. Burbank and Mike Shaw Photography.

The Star Tribune
“Great Lakes northern lights hunters are a phenomenon all their own”
Feature Article Interview, November 2015
• Melissa was interviewed for a feature on aurora hunters in the Outdoors section of the Star Tribune, covering Minneapolis and Saint Paul. Print edition titled “Caught in the Lights.”

Excerpt:
“Melissa F. Kaelin’s majestic Sweet Raspberry Sunset is softly optimistic. Blackened natural objects on the earth’s surface stand with persevering will and hope as if calling on the universe, beguilingly and colorfully represented by the sky itself.

“The earthbound seem to be reaching for the healing power of a splendid, as opposed to an indifferent cosmos. In Kaelin’s view, it seems to be a cosmos where we can faithfully turn to at those times when we feel insignificant and hopeless.

“Her universe seems to have an overwhelming possibility so powerful that our humanness doesn’t quite yet have the ability to comprehend it. An invocation to cosmic healing energies that are hopefully finally returning to our ailing planet. Good news!”

“We Had To Go On Living”
Cover Artist, Prose Chapbook 2013
• Melissa was offered the opportunity to be a cover artist for a chapbook of essays on grief by Author Joe Wilkin for Red Bird Chapbooks. The author selected her painting “Mauve Memories” as the cover art for his chapbook entitled “We Had To Go On Living,” published in 2013.